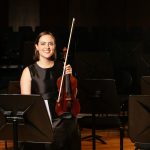 Born and raised in Armidale, Eliza Scott went on to complete her undergraduate studies at the Queensland Conservatorium, Griffith University where she was the recipient of major prizes including the Owen Fletcher Postgraduate award and the Matilda Jane Aplin award. In 2017 she gave the occasional address at her graduation ceremony where she received First Class Honours and the University Medal. A passionate orchestral musician, Eliza regularly performs with the Queensland Symphony Orchestra, the Southern Cross Soloists, and has been the principal second violin of the Australian Youth Orchestra in both 2018 and 2019.

In 2020 Eliza was awarded her Masters of Performance from the Royal College of Music in London, where her studies were supported by the Australian Government through the Australia Council for the Arts. Highlights of Eliza's time in London included recording at the Abbey Road Studios, performing for the Prince of Wales at Windsor Castle, teaching Princess Charlotte at her Nursery, performing at Australia House and appearing in orchestras conducted by Simone Young, Sir Antonio Pappano, John Wilson and Rafael Payare.

Eliza is an enthusiastic teacher and educator, having first been employed by NECOM as a one-to-one violin teacher in 2012 and 2013. She has toured NSW with NECOM's Chamber Music in Schools program and is a regular tutor at the Junior Orchestral Workshop. Whilst in London, Eliza was a mentor and assistant for the Royal College of Music's education program, Sparks, and taught violin and directed ensembles at the Questors Young Musicians Club. As an alumna of NECOM's substantial music performance programs, Eliza is very proud to be joining the NECOM team in 2020.