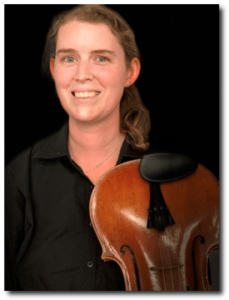 Laura joined NECOM in 2015 as a full time string teacher of violin and viola and as an ensemble conductor. She has an impressive background as a music educator and violin/viola teacher, in addition to her performance career as an outstanding violist both in chamber ensemble and symphony orchestra.

Laura studied violin and then viola at the Sydney Conservatorium of Music and graduated with a Bachelor of Music Education (Honours) in 2008. Her teachers included Anne Louise Commerford and Jane Hazelwood (SSO).  She then went on to study performance at the prestigious Australian National Academy of Music in Melbourne with Chris Moore and Caroline Henbest (Australian Chamber Orchestra).

Laura’s keen interest in chamber music began when she attended the Sydney Conservatorium Open Academy as a secondary student and violinist.  As an undergraduate at the Conservatorium she formed the Bloodwood Quartet in 2006 that toured interstate and to China and South East Asia as the University of Sydney's cultural ambassadors. She has participated in masterclasses with Borodin Quartet, Takacs Quartet, Goldner Quartet, Flinders Quartet and Australian String Quartet.

Since moving to Armidale in 2015 Laura has enjoyed playing chamber music with her Armidale music colleagues performing with the Armidale Symphony, Errol Russell Sinfonia and collaborating with visiting artists.