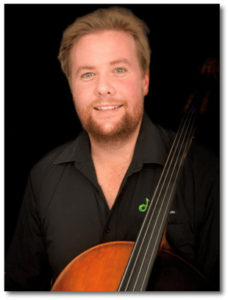 Robert’s musical education began at the Orange Regional Conservatorium where he studied cello with Tom Woods. As a student he was introduced to chamber ensemble and orchestral performance as an active member of Orange Symphony Orchestra and then principal cellist with the Sydney Youth Orchestra. Robert was awarded the Margret Henderson Trust scholarship in 2005 and moved to Sydney to study with Georg Pedersen at the Sydney Conservatorium of Music, completing  his Bachelor of Music in 2009.

During his time at the Sydney Conservatorium, Robert was a member of the Sydney Sinfonia and formed the ‘Bloodwood Quartet’ which performed and toured extensively in Australia and South East Asia as cultural ambassadors for Sydney University. His quartet performed for Musica Viva and were part of the Australian Youth Orchestra's Young Concert Artist program undertaking a month-long residency in Armidale in 2008.  In 2009 he joined ‘Quartet Australis’ and toured with the Holland America Cruise Line.

In 2010, Robert moved to Germany for post-graduate study at the Hochschule fur Musik in Hannover and was awarded his Masters in Performance in 2014. While in Hannover Robert was principal cellist with the Deutsch Junger Symphoniker, the Harvestehude Symphoniker and the Treppenhaus Chamber Orchestra. In 2014 Robert returned to Australia and began teaching Cello and string ensembles at the New England Conservatorium of Music. He performs regularly in chamber music concerts, Chamber Music in Schools concerts, and as a guest conductor and Principal Cello with the Armidale Symphony Orchestra. In his spare time, Robert enjoys digging golf balls out of bunkers, playing double bass and trombone, and is a pottery enthusiast.