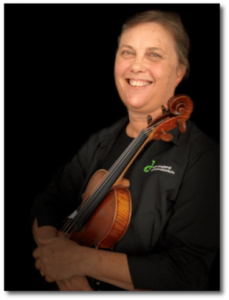 Joanna is highly regarded among her peers as a violin/viola teacher and ensemble conductor, having worked in schools in Melbourne and Brisbane as well as running her own private studio.

Joanna moved to Armidale to take up the position of Head of Strings at the New England Conservatorium of Music in January 2015. She has had great success with her Year 12 HSC students receiving Encore nominations and acceptance into tertiary institutions for performance degrees.

Since moving to Armidale Joanna has been an active chamber musician joining forces with her NECOM colleagues, the wider community of string players in Armidale and the Sounds of Summer Camerata in the Riverina. She appears regularly as concert master of the Armidale Symphony Orchestra, Errol Russell Sinfonia of New England and a member of the Mimosa Orchestra for Opera in the Paddock productions.